A centrifuge is a device that applies a sustained centrifugal force (that is, a force produced by rotation) to propel matter out of the center of rotation. This principle is used to separate particles in a liquid medium by sedimentation. In general, the centrifuge is used in laboratories as a process for separating the sedimentation of liquid and solid components.

What are the types of centrifuges?

Depending on the type of centrifuge, each one will have different operation and characteristics (type of rotor and type of sample holder tube). In the case of its electrical control, it will always have different elements such as time control, temperature control, refrigeration control, rotation speed, among others.

The centrifugation process has a wide range of uses in all fields of our lives, especially in the medical field. Centrifugation devices have different uses. For example, blood separation, DNA / RNA separation, cell culture separation and others such as the study of viruses, proteins, nucleic acids and polymers. These types of high-end centrifuges can separate mixtures of different size molecules or microscopic particles, such as blood cells. This technique has become a fundamental step in the analysis of blood samples, especially in blood bank laboratories.

This is one of the newest techniques in the medical field to hold donated blood and "wash" it. To do this, you need this blood washing centrifuge, the high-end device your laboratory needs. The red blood cell flushing procedure is done when people need a blood transfusion. In this process, most of the plasma, platelets, and white blood cells are removed. These types of tests are also performed to see if the donor's blood is compatible with the recipient's blood or not. That is why this device has become an essential and fundamental device in any blood bank laboratory.

One of the most important processes in any type of laboratory is the separation of particles. That is why centrifuges are useful to perform this important procedure in order to achieve the desired results. Is there another device that can perform this task? We hardly believe it. Centrifuges are the devices you must have if you need to perform a fast turning force to separate the contents of the mix with different densities. High capacity refrigerated centrifugal devices have different uses in any medical, scientific or medical field. For example, blood separation, DNA / RNA separation, cell culture separation and others such as the study of viruses, proteins, nucleic acids and polymers. Its main function is to collect rapidly sedimenting substances such as erythrocytes, yeast cells, nuclei, and chloroplast.

One of the uses for this high capacity refrigerated centrifuge is to collect rapidly sedimenting substances such as erythrocytes, yeast cells, nuclei, and chloroplast.

The parts and uses of the microhematocrit centrifuge, this RCF MAX RCF Tabletop Centrifuge low speed is 13500g and its maximum speed is 12000rpm. About the control system, this YR134-2Model is powered by microcomputer control, DC brushless motor, with stable operation function, minimal noise and high-speed precision. This means that this model meets environmental standards. Another great feature is that this is a programmable machine, so operation data can be stored automatically.

A centrifuge is a device that applies a sustained centrifugal force (that is, a force produced by rotation) to impel matter ...

Tube breakage in a centrifuge - Kalstein

The centrifuges for laboratories are equipment used to make the sedimentation of the components in a solution ...

How to handle a  centrifuge? - Kalstein

To use a refrigerated centrifuge it is necessary to follow a series of steps that allow its safe operation..

The maximum RCF of this PRP centrifuge is 2200g and its maximum speed is 4000rpm. About the control system, this YR469-1 model is powered by microcomputer control, DC brushless motor, with stable running function, minimal noise and high-speed precision. You also have a PRP kit available. This PRP centrifuge machine has a special program available for the PRP kit. Another great feature is that it is a programmable machine, so operation data can be stored automatically. It also has an LED or LCD display with a touch panel, which makes operation much easier. Other excellent features of this PRP centrifuge are: 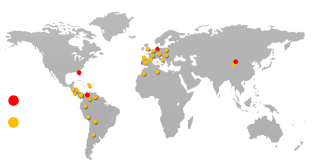 Send a message
Powered by
Hello
What can we help you?